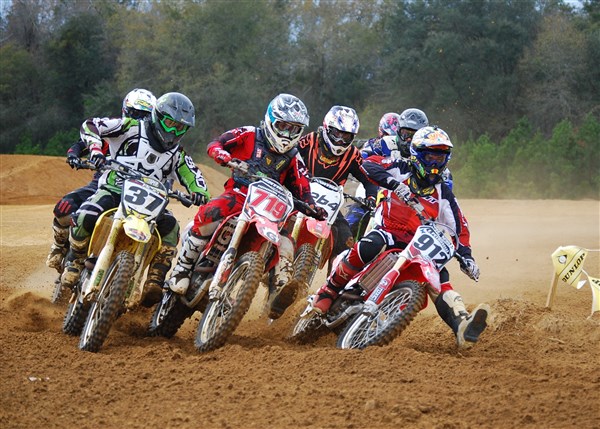 An economic impact study recently conducted by the Georgia Tech Enterprise Innovation Institute indicates that motocross in Grady County is big business for the community.
Grady County Joint Development Authority Executive Director Chadd Mathis applied for and was awarded a grant from Georgia Tech in March 2013 to analyze the financial impact of the motocross industry on the community.
According to Mathis, the study was paid for with the grant and a private, local donation. The JDA executive director shared the results of the study with members of the chamber of commerce board of directors Monday.
As part of the study, Georgia Tech researchers visited Grady County and talked with motocross facility operators; surveyed motocross visitors about their spending; and interviewed local residents about their opinions regarding the local motocross industry.
The Georgia Tech study indicates that the total economic impact of motocross on the community is 66 jobs, $1.7 million in personal income and $3.8 million in economic output annually. Additionally, motocross generates approximately $263,000 in state and local government tax revenues, the report states.
The study also notes that not everyone in the community is pleased with the county having become “the motocross capital of the world.” Primarily the complaints were over noise and related mental frustration and stress as a result of the noise.
From the opponents of motocross who were interviewed, it was estimated that $125,000 in annual revenue is lost from the operation of motocross facilities in the county.
The study also backs up what The Messenger has previously reported that riders from all over the world including the United States, Europe, Australia, South American and Canada come to Grady County to train.
Grady County is home to several motocross facilities including Millsaps Training Facility, Georgia Practice Facility, Action Motocross Park, and Camp Carmichael, which is owned by Ricky Carmichael.
Millsaps Training Facility is the best known facility, according to researchers, and it opened in 2004 with 15 members. The study reveals there are currently 40 full-time members, most of whom live and train at the facility year-round.
The facility offers full hookups for RVs and many members exercise the option to live at the track. Riders range from age 11 to 22 and pay $20,000 per year, according to the study, to train at MTF.
Nearly 40 percent of the riders training at MTF are foreign nationals.
The study says that MTF is sponsored by such firms as Red Bull, Factory Connection, Dunlop, DC Shoes, and Under Armour.
According to the recently released survey, MTF also conducts multiple camps during the year ranging from two-days to seven weeks and entry fees ranging from $900 to $1,200 per week.
MTF is operated by Colleen Millsaps, mother of well-known rider Davi Millsaps and sits on approximately 50 acres on Bold Springs Road.
Georgia Practice Facility is located next door to MTF and is owned and operated by former motocross rider Josh Woods. GPF has up to 36 full-time members, according to the study, but current membership is 27 full-time members. In addition to RV hook ups, GPF also features six cabins and two apartments.
The study says that GPF only conducts a single four-week camp each year, but has several riders who come for daily, weekly and monthly stays. GPF sits on 80 acres and is also located on Bold Springs Road.
According to the study, the local motocross industry attracts visitors who spent a minimum of 11,000 visitor days in Grady County as a result of motocross. Based on survey results, each visitor spends $87.22 per person per day in the local economy during their stays here.
The study indicates that 54 jobs in the local economy are created by motocross. This not only includes trainers and mechanics at the motocross facilities, but also suppliers to the facility, local hotels and restaurants and retail establishments.
Another 12 jobs in the local economy are the result of “indirect and induced economic activity” that occurs because of the motocross industry, according to the study.
Mathis said he is hopeful the study can be used in recruiting business or industry that supplies or is related to motocross.
Current land use regulations make it nearly impossible for additional motocross facilities or expansion of current facilities due to required setbacks.
However, Mathis says that there is an opportunity to recruit suppliers and manufacturers of motocross equipment to the community and the Georgia Tech study is a valuable tool in that effort.
“We definitely want to take advantage of every opportunity we have as we work to create more jobs and stimulate the local economy,” Mathis said.
The study credits Grady County resident Glen Barrett for providing a history of motocross in the county, which according to the study, dates back to 1974 when the late Bob Bell opened Cairo Cycle Center and established the Cairo Motocross Track in 1975. Years later John Dollar built Hog Pen Motocross Track on GA Hwy. 112. Barrett told researchers that Dollar offered Ricky Carmichael the opportunity to practice at Hog Pen in exchange for advertising the local track as Carmichael’s “home track.”
Anyone interested in obtaining a copy of the economic impact study or to inspect a copy, contact Mathis at 229-377-3663.