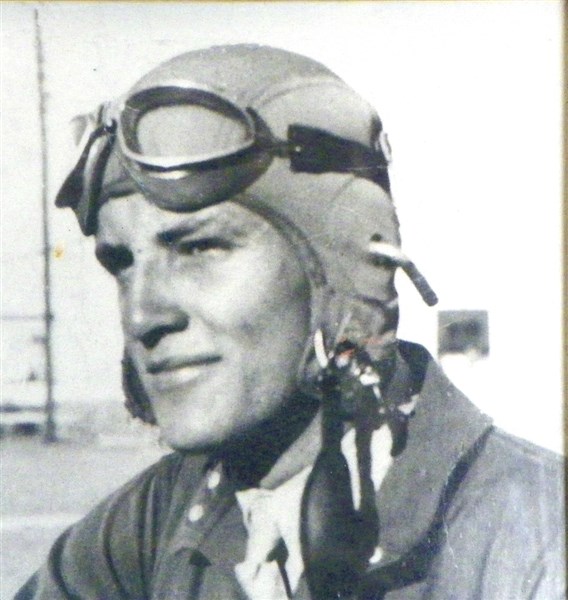 Jacob Arthur Reddick, a flight officer in the U.S. Army Air Forces, circa 1943. (photo courtesy of the Blanton family)

Most people recognize the significance of June 6, 1944, as being “D-Day” in World War II, and this year heralded the 70th anniversary of that historic event.
Often lost in the fanfare of “D-Days” notoriety is another historic battle that will likewise turn 70 this year. “Operation Market Garden” was a plan envisioned by British Field Marshal, Gen. Bernard Montgomery as a way to end World War II by Christmas of 1944. Its tactical design was to outflank the German forces and close behind them on their own soil. This operation commenced on Sept. 17, 1944.
One of the participants in that epic battle was Cairo native Jacob Arthur Reddick, a flight officer in the U.S. Army Air Forces who flew a CG-4A glider. Reddick, born Sept. 20, 1922, had been unable to fly in the D-Day operation, but had participated in the Southern France operation, Dragoon, on Aug. 15.
Day Two of Operation Market Garden was a foggy, wet Tuesday. Foul weather hung over southeastern England and the Channel. Reddick, along with an aerial armada, finally saw the weather improve as they reached the Belgian coast. Late on that afternoon, some seven hours before turning 22 years of age, Reddick arrived in the vicinity of Boxtel, Holland. He was the sole pilot onboard Army Air Force glider, Serial Number 42-73997.
The air formations flying into Holland that day were under intense anti-aircraft fire. Possibly off course for their landing zone, a shell suddenly cut the tether-line that connected Reddick’s glider to its C-47 tow plane. Reddick was able to land the glider safely, but had to land in enemy held territory.
Only in the past few months, through the courtesy of Dutch researcher Hans den Brok, has Reddick’s family learned details of the events that he endured that day. Sadly, Cairo native, Jacob Arthur Reddick, would not live to see Sept. 20, 1944, which would have been his 22nd birthday.
There were four other allied soldiers accompanying Reddick in that glider. Within about one hour of its landing, a large number of German soldiers approached the landing site. On the Germans’ approach, a fire-fight ensued between them and the American personnel. A barrage of machine gun fire from the Germans mortally wounded young Reddick, as well as one of the other men, Pvt. H. C. Robinson. One of the remaining three men sustained a head wound. The surviving men from the glider were taken prisoner and spent the remainder of World War II in POW camps.
Reddick lost his dog-tags during or after the fight and was initially misidentified by Dutch medical personnel as a soldier named “Rennick,” using his clothing as a reference source.  He was buried in a Boxtel, Holland, cemetery, along with Private Robinson and two other American soldiers killed in that general area.
Reddick’s fate initially being unknown to the Allied forces, he was listed as a Missing In Action (MIA) from Sept. 19, 1944, until Sept. 6, 1945.
In 1945, after Holland’s liberation, Reddick and the other deceased personnel were disinterred between Sept. 27 and Oct. 5, 1945.  It was then found there had been a mix-up between the man named “Rennick,” and a solider named Claude Shook. Because his identity was uncertain, Reddick was re-interred on Oct. 5, 1945, some 58 miles from his death site, at Margraten Cemetery as unknown soldier X-01920. Almost four years after his death, Reddick was disinterred for a second time on Aug. 30, 1948.
On or about Sept. 24, 1948, his remains were finally identified by dental charts as that of Flight Officer Jacob A. Reddick.
Reddick’s body languished for many months in storage as the Army and his Cairo family worked out the details of whether he would be reburied in Europe or returned to the United States for final burial. Reddick’s long trip home to Cairo was not yet complete.
On Sept. 15, 1949, Reddick’s remains were shipped to Bressoue, Belgium. On Oct. 13, his body traveled to Bremerhaven. On Oct. 25, 1949, he was loaded aboard the ship USAT Francis X. McGraw. On Nov. 4, 1949, his remains arrived at the New York Port of Embarkation.
Commencing on the evening of Dec. 12, 1949, escorted by Capt. Charles H. Hooper, Reddick began the long trip to Cairo by train.  He arrived on Dec. 14, 1949, and his body was received by the Bearden Funeral Home. Over five years after his death, Jacob A. Reddick was finally home.
Reddick was buried for the third and final time in a Reddick Family Plot of the Cairo City Cemetery. Today, he rests only a few feet away from his father, mother and various siblings.
The surviving Reddick family is now gone from Cairo. The family plot and its graves lay quiet next to shady trees in mute testimony of the family buried there. Reddick’s singular headstone provides his basic biographical data of name, birth and death date, but is silent on what he was and what he sacrificed on that day so long ago.
His descendants plan to correct this oversight on Friday, Sept. 19, POW/MIA Day. The Reddick family is adding another granite marker above his body in the Cairo City Cemetery to commemorate what this young man was, what he gave in that faraway place so long ago, and the arduousness of his final trip back home to Cairo.
Editor’s Note: Jimmy Blanton is married to Kathy, whose father Robert was brother of Jacob Reddick. Jimmy Blanton served in the U.S. Navy and is a Vietnam War veteran and private pilot.