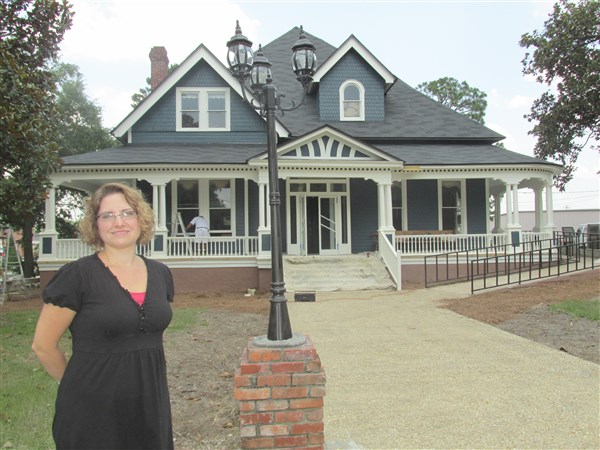 MEGHAN RIDENOUR and her husband, Robert, not pictured, have purchased the W.S. Wight home in downtown Cairo and renamed it Brasington Place, in honor of Robert’s grandmother.

A big part of downtown Cairo’s history is getting a facelift and new purpose thanks to a local family who are doing much of the work themselves.
Meghan and Robert Ridenour have purchased the W. S. Wight home at the corner of Third Avenue, S.E. and First Street, S.E., that for the majority of its 113 years has served as a private family home. Although it has been vacant for the last few years, the house most recently enjoyed a stint as a popular restaurant, Annier’s Courtyard.
“I always loved that house. I hated to see it sitting there deteriorating,” says Meghan Ridenour.
So, in March, the Cairo High School Spanish teacher and her husband bought the home from Capital City Bank and quickly began refurbishing it to transform it into event space. The couple named it Brasington Place after Robert Ridenour’s grandmother who had a similar style house in Grandin, Fla., where he was raised.
The 4,000 square foot space still had a solid foundation, according to Meghan Ridenour, and the electrical and plumbing had been updated recently. “We recognized the potential that it had,” she says.
Although Robbie Anderson is working as painter and carpenter, Robert Ridenour is completing the cosmetic work to the interior. Inside, many walls have been re-plastered and painted, the ceilings covered with faux tin tiles, and light fixtures replaced.
The home was built in 1901 for William Samuel Wight and his wife Sarah Burton. The architect was George F. Barber of Knoxville, Tenn., well known for Victorian style homes with a large central hallway, grand staircase and intricately carved fretwork.
Brasington Place exemplifies this style with the original heartpine floors and an elaborate wood carving greeting guests the moment they enter the front door. Barber homes can be found in all of the 50 states; he is regarded as a pioneer of the mail-order blueprint catalog.
Sarah Burton Wight lived in the downtown Cairo home after her husband’s death except for 10 years, 1932-1942, when the Robert Crine family rented it. The Crines, from New Jersey, had moved to Cairo to start a dairy, according to historical documents from Roddenbery Memorial Library.
Upon Mrs. Wight’s death in 1953, the home was deeded to her daughter, Louisa Sheehy who continued to live there with her brother William, who lived there part-time, until she sold it in April 1980 to the Allen Martin family.
Ridenour is still researching to determine the home’s history beyond 1980.
Originally a wood frame sided home, the owners wrapped the house in a red brick veneer in 1941. Meghan Ridenour says the veneer seemed to help preserve the original woodwork of the home’s exterior.
White when they purchased it, the home is now getting a new look with a complete paint job in the color of “Sailor’s Coat” blue with white and brown accent colors. Once the painting is complete, landscapers will improve the surrounding grounds.
All immediate work on the home is expected to be complete in the coming weeks, according to Meghan Ridenour who is researching, decorating, marketing and hiring the workers for the project.
Already taking reservations for August, Ridenour says she and her husband plan to continue their full-time jobs in addition to managing the space. Robert Ridenour works for the state of Florida in the Department of Insurance.
Once complete, the home will include four large banquet rooms each equipped with original fireplaces. Customers will be able to rent by the room by the hour or half a day. Also available to clients will be a commercial kitchen, a dishwashing room, and a prep kitchen. The home’s wrap-around porch, a patio and lawn will be useable outdoor venues.
Still on the drawing board are plans for the upstairs portion of the house, which includes five bedrooms and three bathrooms. Ridenour says she is toying with the idea of refurbishing that area later.
For more information contact Ridenour at (229) 516-0901. A website advertising the facility is under construction and will be accessible at www.brasingtonplace.com when it is complete.
Posted in News