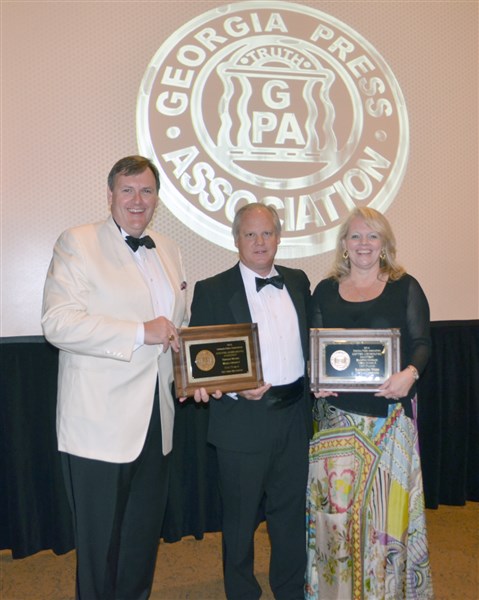 The Cairo Messenger came home a winner from the Georgia Press Association’s 2014 Better Newspaper Contest. The awards were presented Friday night at GPA’s 128th annual convention held at Jekyll Island, Ga.
The Messenger won three awards, two for first place and one for second place, in a new division revamped since last year’s contest, which includes all papers in Georgia with circulation of 4,000 to 14,999.
The Messenger won first place in Education Coverage for publisher and editor Randolph Wind’s 2013 reporting on activities involving the Grady County Board of Education. Judges commented, “Terrific watchdog reporting! Nice use of FOI (Freedom of Information) and persistence to tell this story. Most courageous story by far in this category.”
Newspaper professionals who are members of the Virginia Press Association served as judges for this year’s contest.
The Messenger editor also earned first place for headline writing. Judges stated, “Too many entries in this category are stretching for puns. This isn’t the Laugh Factory. Cairo manages to pull the reader in while matching the tone of the story.”
A second place award for hard news writing was also won by The Messenger.
Winner of General Excellence for the division was The Eatonton Messenger with The Jackson Herald, Jefferson winning second place, and The Jones County News tying for third place with the Morgan County Citizen.
“The awards we won were the effort of both individual staff members and our team as a whole. No matter whose name is on the plaque our subscribers, readers, advertisers and our community are the real winners. We are proud to publish an award-winning community paper dedicated to the growth and development of our county,” Messenger Editor and Publisher Randolph H. Wind said.
Representing The Messenger at the GPA convention were Editor Wind and Mrs. Mesha C. Wind.
The Messenger’s awards in the Better Newspaper Contest comes on the heels of GPA’s Advertising Contest, which was held in April. The Cairo Messenger won six awards in the ad contest, and earned points towards the General Excellence award.
Over the last five years, The Messenger has won a total of 89 awards in the GPA contests.
Wind credits the talent and dedication of team members Bert Wind – sports photography; Mesha Wind – news reporting and ad sales; Brynn Knight – graphic design; Linda Lee – ad sales; Jennifer Searan – photography and ad sales; Jim Wyatt – proofreading and writing; Michael Best – sports writing; Jeff Zipperer, Rufus Morgan and Pat Wind – circulation; James Lamb – contributing photographer; and contributors Pearline Thompson, Sheridan Harrell and Joyce Herndon; for the newspaper’s recent success.
The rules of the contest designate the dates of issues that are to be submitted for judging in categories ranging from layout and design to news writing to sports photo. Those dates are not made public until after the end of the year so newspapers cannot plan for the issues that will be judged.
The newspaper editor noted that without the continued support of the paper’s advertisers, subscribers and readers the newspaper could not survive.