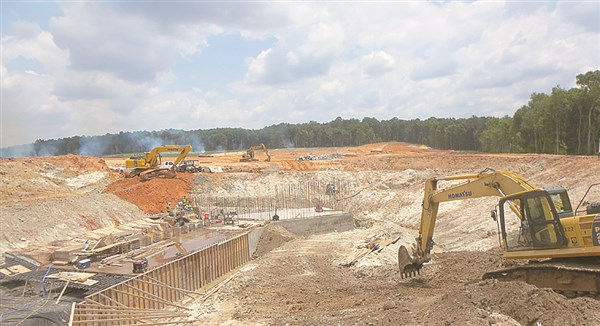 CONSTRUCTION of the reinforced concrete chute spillway at the Tired Creek Lake dam is continuing. Crews are making good progress on the dam construction, according to county officials.

Replacement pipe to go into the Tired Creek Lake’s principal spillway riser is expected to be delivered later this month and officials with Schnabel Engineering, the firm that designed the dam, say that crews have made significant progress on the project.
The new pipe will replace 60-inch diameter pipe in 20-foot sections that was delivered in mid-February and installed only to be damaged by heavy rains on March 16 and 17.
Grady County Administrator Carlos Tobar said the pipe is expected to arrive June 23, but it could be delivered sooner.
According to the county administrator, the damaged pipe was demolished on site and the debris has been piled up for use by the Bill Dance Signature Lakes as part of the fish habitat for the 960-acre lake.
Tobar says county crews have also made significant progress in clearing debris from the lake bed.
Brad Boyer of Schnabel Engineering recently reported that despite a rainy start to the year, Brad Cole Construction Company, the general contractor on the dam, is projecting for construction to be completed by the end of 2014.
“Construction activities at the dam site are currently focused on the construction of the reinforced-concrete chute spillway. Brad Cole and its subcontractor, North Georgia Concrete, have performed foundation preparations, drain installations, reinforcing steel placement and concrete placement associated with portions of this spillway. In addition, Brad Cole crews have continued to place earthfill in the embankment and has installed portions of the subsurface drainage system,” Boyer said.
The county is paying Brad Cole Construction $8,932,752.49 to construct the 2,200 feet long 42-foot-high dam.
Posted in News