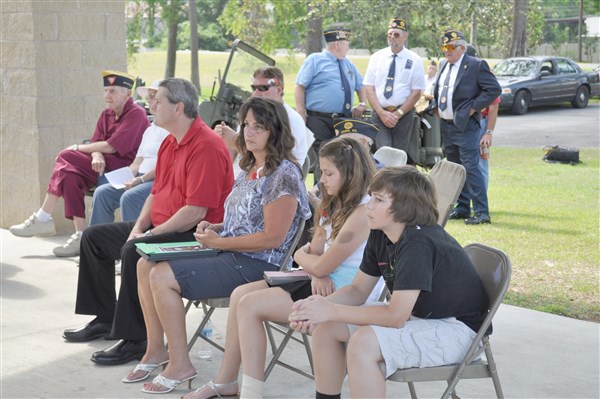 DESCENDANTS OF THE LATE JAKE MAX POLLER were present Monday for the official naming of American Legion Post 122 in memory of the late World War I veteran and Cairo merchant. Shown in the top photo are members of the Richards family including, left to right: Mark, Debra, Emily, Faith and Adam Jake. Debra Richards is the granddaughter of Jake Poller and her son Adam Jake Richards was named in honor of her grandfather. Post 122 Commander Tom Sampson made the presentation to Mrs. Richards and Grady

Grady countians paused Monday to honor the men and women who have died in service of their country in the armed forces during a Memorial Day observance held at Cairo’s Davis Park.
One of the highlights of the observance was the official naming of American Legion Post 122 in memory of the late Jake Max Poller.
Born in Russia, Poller and his family came to the United States when he was 11 years old. In 1907, they came to Cairo and in 1917 he was inducted in the U.S. Army.
Poller served in the 157th Depot Brigade and the Provost Guard Company at Camp Gordon, Ga., until July 10, 1919.
While serving in the army, Poller became a U.S. citizen. After his discharge from the army, he returned to Cairo, where in 1921 he opened his own clothing and dry goods business on South Broad Street. He continued in business at that same location until 1970.
Post 122 Commander Tom Sampson described Poller as a “top notch” legionnaire and told the audience of his visits to veterans in area hospitals and, in later life, to residents of area nursing homes.
Grady County Commissioner Charles Norton read a proclamation honoring the late Cairo merchant and veteran. He also shared with the audience his recollection of Poller being at the bus station as he left for service in the Vietnam War. “He would present us all with a Bible and give us a send off at the bus station,” Commissioner Norton said.
According to Post 122 Historian Bryan King, Poller was a charter member of the local post and was recognized with almost every honor Post 122 could bestow.
During Monday’s Memorial Day observance, Commander Sampson also recognized the efforts of Post 122 Historian King for his decade-long project to create the Grady County, Georgia, Memorial Log. King has created a website located at www.gradymilitary.us that chronicles all veterans from Grady County.
Monday’s program also included a short history of Memorial Day by United Daughters of the Confederacy member Annette Harrell, as well as musical entertainment by Sam Carnline, Bobby Newmons, Adam Starr and Bill West.
Veterans of Foreign Wars Post 8433 hosted the program and Post 8433 Commander Doug Taylor served as the emcee.
The Cairo High School NJROTC unit presented the colors and talented local vocalist Cheryl Mills sang the national anthem.
Marine veteran Captain Bob Taylor was the keynote speaker at Monday’s Memorial Day observance.
Taylor said that Americans, and particularly younger generations, must never forget the number 1,353,812.
According to Taylor, that is the number of U.S. war deaths dating back to the American Revolutionary War.
He also encouraged the audience to visit a national cemetery.
“I don’t mean just visit. I don’t mean a quick-stop or a drive through. I mean an old-fashioned, down-South, park the car, come on in and stay awhile visit. Walk the rows of white markers,” he said.
Taylor said that if visitors to the national cemetery are receptive, they might hear a message from the graves. “You might hear it as the rustling of the leaves in a breeze, or a chickadee calling its mate, or even the soulful echo of a far-off night train.”
The guest speaker said that children are not learning about the sacrifices of the military and the reason for Memorial Day.
“They think it is about picnics, barbecues and weekend parties. As parents and grandparents, we should learn more about the country’s history. Then we should teach the kids “In earnest,” Captain Taylor said.
The program ended Monday morning with members of Post 122 Ladies Auxiliary presenting the wreath and the sounding of “Taps.”
Posted in News