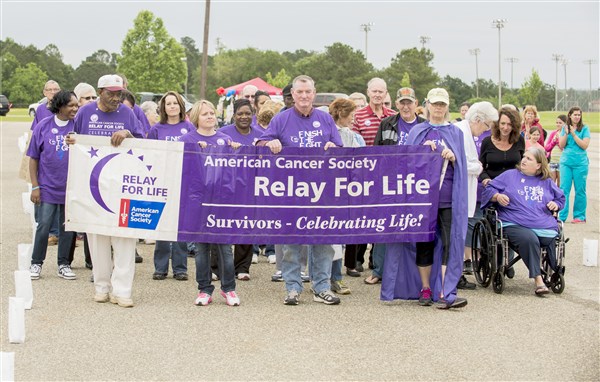 CANCER SURVIVORS kicked off the relay by walking the traditional first lap.

Several rain soaked days leading up to Grady County’s Relay for Life forced organizers to move the weekend event from Cairo High School’s track to Grady County’s recreational fields Friday. Still, coordinators say teams of walkers and other supporters of the American Cancer Society raised nearly $39,000, and are on track to meet this year’s goal of $42,000.
The event held at Barber Park kicked off Friday, May 2, at 6 p.m., with a super heroes theme of “Saving the World One Cure at a Time.” The opening ceremony was led by Chastity Cox, local relay chairperson, and a word from one of the event corporate sponsors, Joshua Bell. Committee members recognized and thanked for their hard work were: Sherry Smith, survivor committee chair; Brenda Corley, luminary chair; Lois Swanner, luminary co-chair; Cyndi Tarin, games and activities chair; Brandy Baggett, games and activities co-chair; Kayna McGee, fundraising chair; James Stuckey, logisitics chair; Lula Bell Johnson, in-kind sponsor chair; Susan Brown-Wright, hospitality chair; Jackie Pearson, team recruitment/retention chair; Sandy Hasick, missions; and Denise Godwin, publicity chair. Also, attending and assisting was Emily Lamontagne, community liaison with American Cancer Society over the Southeastern Region.
Relay speaker was Dr. Meghann Blankenship who shared about her experience with a friend who was affected by cancer and her bravery and strength to overcome it.
Before the first lap, Boy Scouts presented colors with a pledge to the American Flag and the National Anthem, followed by a prayer by Pastor Mike Mobley.
The community celebrated its cancer survivors with cake and gift bags and cheered as they took the first lap around the track. After the survivors, all caregivers walked a lap followed by all medical professionals. Entertainment soon followed with performances by twirlers from FPA Foundations and Twirl Moore and several performances by The Firm Dance Company. Bobby Newmans entertained the crowds with singing and guitar playing.
Many activities took place throughout the night ranging from a scavenger hunt, obstacle courses, cancer trivia, and lots of dancing and singing as people continued to walk the track. There was also a Zumba workout by Aurielle Wilson and Crossfit of Cairo.
The team that raised the most money was Southside School. The best campsite was by The Church of Grady County, and winner of the Derby Car Race was Cairo High School’s National Honor Society. The “Bruty” Contest winner was The Church of Grady County.
Michael Best was emcee for the night with Stan Mobley of Starlight Mobile DJs providing the sound and music for all performances as well as entertainment for the crowd.
A touching luminary candlelight Service was observed at 9:30 p.m. with prayer by pastor Doug McGee, followed by those names called out in honor of and in memory of loved ones. Some families lighted torches and others released lighted balloons during the ceremony, as well.
Grady County fielded a total of 16 registered teams this year and even with a change in venue the week of the event and the threat of rain, still managed to have 12 tents at the Relay.
The teams had raised $38,929 as of Friday night with monies still coming in from the community and other fundraising events taking place this week. “I have no doubt our goal of $42,000 will surely be surpassed as our community rallies together to support this worthwhile cause to ‘fight back’ and find a cure for cancer,” says Chastity Cox.
Organizers say they would like to extend a special thank you to Becky Bracewell and her staff at Barber Park and to the Grady County Commissioners for hosting the event this year at Barber Park. They also wish to thank the family of Long Branch Church for providing various equipment and their services. Cox concludes, “To the many other contributors of equipment and decor, all the teams, vendors and all Grady Countians who came out to walk and give their support we appreciate everyone for a very successful event.”
Posted in News