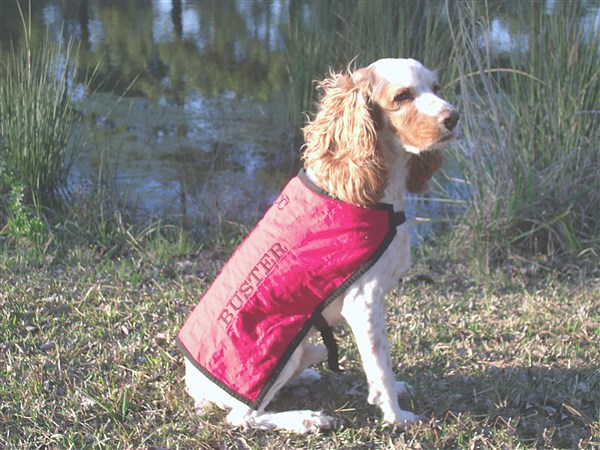 BUSTER is a trained therapy dog owned by Kim Rosencrantz of Cairo.

A dog who had a rough start in life is now giving solace to humans going through rough patches in their own lives. Buster is a trained therapy dog who works with his owner, Kim Rosencrantz of Cairo, who is also a certified dog obedience trainer and instructor.
Buster was abandoned as a puppy in Savannah, but was found and loved by a lady named Rita.  Although Rita loved Buster, she already had other pets, and she knew that eventually she would have to find another home for Buster. She started searching surrounding Savannah neighborhoods, but to no avail.
Beginning to feel defeated, Rita asked for help from her best friend, Gena, who lived in Tallahassee, Fla. Both women agreed there was something very special about Buster. He was housebroken, still young but out of the puppy stage. He always got along with other pets and most importantly, he loved people. A kind hearted dog, he always seemed to want to do his best for everyone. The friends agreed they could not just drop him off at a shelter. They searched and prayed for a family for Buster.
About that time, Rosencrantz and her daughter, Sierra, had been searching for the perfect dog that she could train to be used as a therapy dog. Rosencrantz says several times she had come close to adopting puppies but, at the last minute, something would happen to change her mind.
After several months, Rosencrantz says she and her daughter stopped searching the shelters and started praying, and on the third day their paths crossed with Gena’s.
After a few minutes of talking, the women agreed that their prayers had been answered; Buster would be a great therapy dog.
Buster started his training and his new life in Cairo in February 2013. By May of 2013, he had completed his testing and received his AKC Canine Good Citizen certification. Buster continued to work hard in his training and in November 2013 he received his Therapy Dog certification.
“Buster followed my every step so, training, through everyday life was relatively easy,” says Rosencrantz. “Plus, I must give credit to Buster. He is one the smartest animals that I have ever worked with. He loves people; his soft hair makes it almost impossible not to pet him and his sweet temperament makes everyone feel calm, comfortable and relaxed.”
Rosencrantz says Buster has been invited and attended several events such as a parent needs meeting for the Grady County Schools Special Education Department; First Grade Career Day at Eastside Elementary School; and Family Day at Grace Stables in Tallahassee, FLa.
“He jumps up and down in excitement when I pull out his working vest that Mrs. Donna Miller made for him.  He knows he is going to visit and he loves it. You can’t help but smile when you see him proudly prance into a room and give young and old ‘Buster’s Best,'” Rosencrantz says proudly.
Studies have shown that interaction with therapy dogs can lower blood pressure, promote relaxation and relieve anxiety and stress in patients, she says.
Rosencrantz says anyone who is hospitalized or in nursing homes in the surrounding area who would enjoy a visit from Buster, may call and leave a message at 229-977-0725.
Posted in News