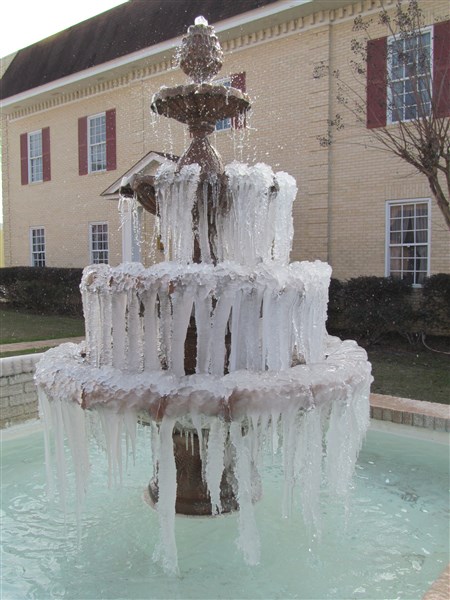 Folks who work and play outside can return to their jobs and routines in relative comfort as the temperature climbs out of the 20s and reaches into the 70s by Saturday.
Local nursery employees had to work feverishly on Monday to cover plants and protect them from the cold weather. Temperatures fell throughout the day with 25.6 degrees listed as Monday’s official low on www.georgiaweather.net.
At Flowerwood Nursery, employees put blankets on tender plants. “The blankets keep the plants about 10 degrees warmer than it is outside,” says Jim Rinker, general manager of the nursery.
Rinker says any plants that experience split bark or appear burned should be left alone. “If a plant is frozen in January, it will be June or July or so before we can tell if it’s going to die. Ninety percent of the time if the bark is split, the plant will heal on its own,” he says.
Because of the cold, nursery employees at Flowerwood worked only half days Tuesday and  Wednesday. Rinker says they will work Friday, usually a nonworking day, to make up for the lost time. Flowerwood is a wholesale nursery locate on 90 acres on U.S. 84 east of Cairo. Rinker says the nursery sells azaleas and general ornamentals and specializes in Encore Azaleas.
School children returned to school Tuesday after a long Christmas holiday, but playing outside was not part of the day due to the cold.
Schools altered their schedules to eliminate or reduce any outdoor time for students at recess, P.E., and end of school pickup.
At Eastside Elementary School, Principal Shelia Cain says the time inside will not be wasted. “We are including a trip to the (school) library to check out books during the three P.E. stations/rotations tomorrow (Tuesday) and on Wednesday, if necessary, to avoid the outdoors. Students had to return their books before the holidays, so this will be a ‘win-win.’ There will be a group in the gym getting exercise, another in the health room and the third in the library,” says Mrs. Cain.
Shiver Principal Patsy Clark says outside time will also be restricted. “For this cold weather, all students come straight into the building as they arrive. All P.E. will be in the classrooms and no outside recess,” Clark says.
Southside Principal Janet Walden says teachers look out for the safety of the children. “When we have extremely cold weather, teachers will minimize the outside time for students. They will also make sure that students are adequately bundled up for the weather when they have to be outside.”
All of the principals said anytime a student comes to school without a coat during extreme cold weather, they work to find coats for them. Some families donate coats to the schools for just such an occasion, other times they borrow from the lost and found.
Chris Addleton, Cairo city manager, said the only byproduct of the cold weather that affected city operations was the frozen water fountain in the courtyard next to City Hall. Luckily, the city escaped any power failures or frozen pipes.
The National Weather Service is forecasting highs to be in the 50s Wednesday and Thursday, the upper 60s Friday and lower 70s by Saturday. Rain is likely Saturday. Lows will be in the mid 30s Wednesday night, upper 40s Thursday night, and the 60s Friday and Saturday nights.
Posted in News