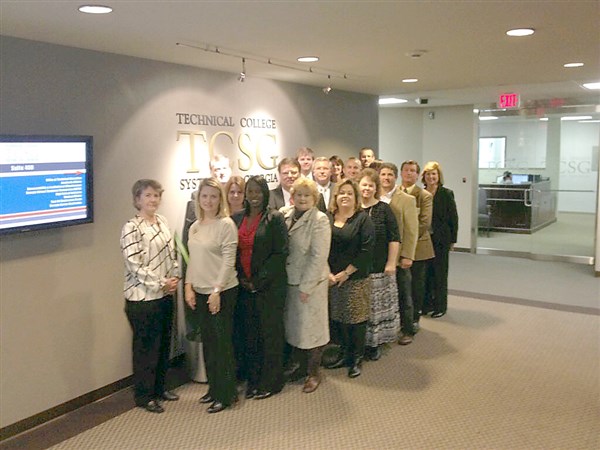 A final hurdle in the application process for Cairo High School’s college and career academy $3 million grant application was cleared this week in Atlanta when a large delegation traveled to the capital city for a group interview before a panel of judges. The local representatives included a variety of business representatives, civic leaders and educators from both the high school and college levels.
Many on the trip reported hopeful expectations that Cairo would be one of the three schools selected to receive the grant when the winners are announced Dec. 5.
“I left with a very good feeling,” said Grady County School Superintendent Lee Bailey on Tuesday, “I feel like we really got a good shot at it. It will be something we definitely need and can definitely use.”
Mr. Bailey was one of 20 delegates representing Cairo in the interview, which was held at the offices of the Technical Schools of Georgia Monday. The judges on the interview panel included two delegates from the office of Lt. Gov. Casey Cagle, a representative from Electric Cities of Georgia, one from the State Board of the Technical College System of Georgia and the CEO’s of the College and Career Academies already located in Newton County and Athens.
“I thought it went wonderful,” said David McCurry, Cairo High School principal, “We had great representation from Cairo and Grady County in Atlanta stating our case for this grant down here. I think what was most impressive was that it was a community wide effort not just a school project.”
Those people representing the community in the interview included Cairo Mayor Richard VanLandingham; Sen. Dean Burke; Rep. Darlene Taylor; Grady General Hospital Administrator LaDon Toole; City of Cairo Personnel Director Carolyn Meades; Cairo-Grady County Chamber of Commerce Executive-Vice President Jennifer Majors; Archway Professional Sharon Liggett with UGA; Dr. Craig Wentworth, president of Southwest Georgia Technical College; Joyce Halstead with SWGTC; and Dr. Michael Stewart with Bainbridge College. Local educators on the trip included McCurry; Todd Gainous; Dr. Kermit Gilliard; Jennifer Hand; Tracey Kelshaw; Timothy Helms; Julie York; Tammy Donaldson; and Mr. Bailey. Also in attendance was CHS student Allen Hartsfield.
“I felt like we were spot on with our presentation,” said Todd Gainous. “I think we met every objective we went up there with. I think we gave them the additional information they were looking for to make a decision.”
If CHS is selected to receive the grant, Gainous is expected to be the CEO of the academy while McCurry would remain principal.
“I really want to brag on David McCurry and Todd Gainous. . . .they were the quarterbacks of this,” said Superintendent Bailey of Monday’s interview. “They directed the questions and managed the time well.”
McCurry said he wanted to thank the teachers who played a key role in initiating this project more than a year ago, and he pointed out that Sharon Liggett was also a pivotal member of the team.
Gainous said discussion is already underway with SWGTC to create a motorcycle maintenance course at CHS. He said the college would provide the instructor and the high school would provide the facilities and the students. He said Millsaps Training Facility here in Grady County has indicated it needs mechanics skilled in working on motocross bikes.
Gainous said if CHS is selected as a grant recipient, the $3 million could be used for capital improvements such as expansion of existing facilities or new construction. He said an additional $150,000 would also be awarded as startup money that could be used for costs associated with items such as architects or studies.
Posted in News