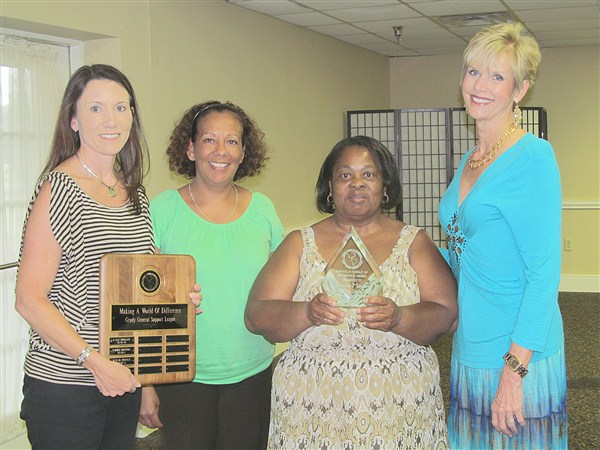 An employee of Magnolia Place is the winner of this year’s Grady General Support League award for healthcare professionals who make a positive difference in someone’s life.
At their annual May Membership Dinner, the support league volunteers surprised Bonnie Masten with the 2013 “Making a World of Difference Award.”
Ms. Masten was nominated by Becky Miller, who thanked the caregiver for being so supportive when the health of Mrs. Miller’s mother began to decline while she was living at Magnolia Place.
“Bonnie was the one who stayed with me long after her shift ended, late into the night, and would many days come in early, long before her shift started to spend time with me. Bonnie was the one who would bring me just a small amount of food, knowing I needed nourishment, but also knowing that I had little appetite . . . She was my new best friend. She talked with me when I needed to talk and, other times, just quietly listened. She cried with me when I needed a shoulder to lean on. Her presence made the most difficult time in my life an easier burden to bear. Most importantly, Bonnie did this from her heart. There was no gain for her in her kindness, it was genuine. Bonnie is a person who makes Cairo a better place. She truly makes a positive difference.”
Mrs. Miller was on hand to help present the surprised Ms. Masten with the award, the fourth given by the support league.
The annual dinner was held at Cairo Country Club on Thursday, when members also elected their new officers for 2013-2014. Officers are Dr. Clair McCaskill, president; Felicia Hunter, vice president; Jane Trulock, treasurer; and Pam Forrester, secretary.
Posted in News