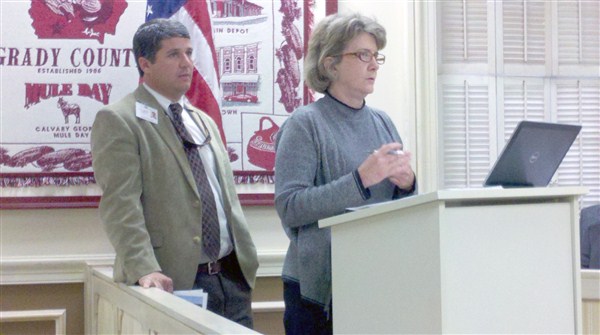 Members of the Grady County Archway Partnership’s Community Health and Wellness Issue Work Group say they are excited about the opportunities the county has to use a proposed sales tax funded aquatic center as a calling card for the community.
“The more I talk to folks in the community the more excited I get. Just look around the region. There is nothing like it and I don’t see anyone else building a lake and having an aquatic center to go along with it,” said Grady General Hospital Administrator LaDon Toole, a member of the Community Health and Wellness work group and liaison for the Archway executive community on the issue work group.
Toole and Archway Professional Sharon Liggett present Grady County commissioners copies of research done by University of Georgia students on the proposed aquatic center and similar projects in Georgia and the southeast.
Graduate students Megan Miller and Samara Scheckler, who are working on their master’s degrees in public administration at UGA, did the research and compiled a report.
The report was first presented to the Archway executive committee last week and Liggett forwarded it to the county commission this week.
“The students’ research answers some questions, but more come up. I think it is a great review of other communities and their projects,” Ms. Liggett said.
She added that hopefully the report would be helpful as the county makes decisions moving forward with the aquatic center.
Toole said until recently he was not sure just what it meant that the county would be building an aquatic center.
Although a pool is an option, Toole suggested that a splash pad and other amenities might be a better and less costly option.
Grady County voters approved $900,000 in Special Purpose Local Option Sales Tax (SPLOST) proceeds in 2006. The six-year tax will expire next March so commissioners have a limited amount of time to begin the project.
Originally the backers of the aquatic center being added to the SPLOST referendum visualized a competition swimming pool.
Due to lower than forecasted sales tax collections and the expense of future maintenance and operation of a pool, county leaders are looking at other options while at the same time fulfilling their legal obligations and satisfying the wishes of the voters.
Toole envisions an aquatic center that would not only attract local visitors but also visitors from other communities. If located at the Tired Creek Lake he said the possibility of future slides that dump into the lake or rock climbing walls that children could climb up and dive into the water could become a “bigger calling card or better option” than just building a pool.
Commission Chairman Billy Poitevint agreed and commented, “I’d prefer something like a splash pad more than a pool.”
Vice Chairman T.D. David said the pool concept was the desire of the original boosters. “The whole thing originated from a core group of parents and their children are now 25 years old. Now the group pushing it has other ideas,” David said.
In addition to deciding what to build, county leaders must also decide where to build it. Another option is constructing it at Barber Park.
Commissioner LaFaye Copeland favors locating the aquatic center at Barber Park for easier access for more children.
Commissioner Charles Norton differed and said there would be more room to expand at the lake site rather than at Barber Park.
When commissioners asked Grady County Recreation Department Director Becky Bracewell her opinion she said depending on where the aquatic center was located on the park property could cause problems for future growth of the existing recreation department programs.
“Parking is an issue now. We have growth issues, but I’d rather have a splash pad at the park than a pool,” Mrs. Bracewell said.
Archway Professional Liggett said UGA landscape and design students may be available this summer to assist the county in addressing ways to beautify Barber Park and to analyze future growth potential and develop a long range plan for the park.
Students last summer did similar design work for the city of Cairo’s Azalea Park, proposed community gateways and a plan for Roddenbery Memorial Library, according to Ms. Liggett.
Mrs. Bracewell is hopeful the students will be made available to help with planning the future development of the park property.
Grady County Attorney Kevin S. Cauley said, in his opinion, there is no clear legal direction when a project has to begin after collection of the tax ends.
“You certainly have the ability to wait until you have the funds collected to build the project. However, the expectation of the voters to have happen what they voted to happen must be addressed. I would suggest you weigh the options of both locations, both of which would have great impacts,” Cauley said.
“All I’ve heard until recently was ‘pool.’ I’m glad to hear it can be an aquatic center,” Commissioner Copeland said.
Cauley noted that ballot language is purposely less defined to allow the board flexibility in specifics for SPLOST Projects.
The board took no action, but accepted the report for future consideration.
Based on interviews the students conducted with operators of several public pool facilities in the Southeast, those facilities built as large attractions are more likely to make money than those built as simply community pools. Still, communities where pools operate at losses consider the outdoor amenities as contributors to the public good in other ways, according to the research. The students spoke with operators of five public pool operations in Georgia, one in Tennessee and another in Alabama.
“Making money is not our aim. Providing people with something they need and can enjoy is. The concept of a splash pad seems like it would be a good starting point,” Vice Chairman David said.
Posted in News