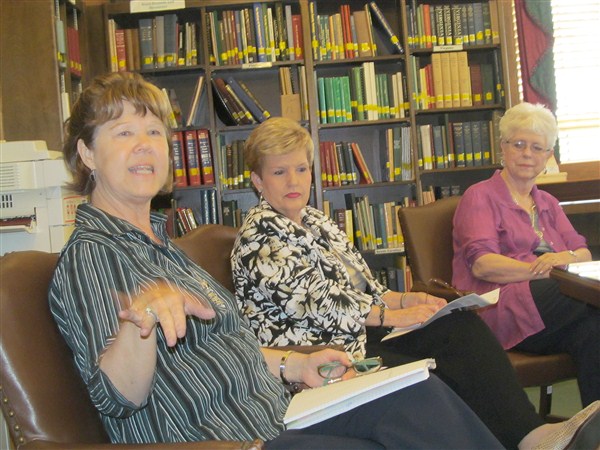 A few community members met at Roddenbery Memorial Library Tuesday to talk about how the institution can best serve Grady County. Library Director Pamela Grigg is seeking input from both those who utilize the library and those who do not. This was the first of what may be several “listening sessions.”
“The primary purpose is to provide input for the strategic plan. We are due to come up with a new one since the last one expires this year,” said Mrs. Grigg. She must submit the new operating plan in August.
Those on hand for the meeting, held in the Trustees Room of the library, praised the library directors for managing to operate so well when budgets have been cut on both the state and local levels. Library hours have been modified, Grigg and Associate Director Janet Boudet must each take 20 furlough days and purchases have been limited. Still, Mrs. Grigg said the libraries’ collection is still utilized, pointing out that in February, alone, they loaned 400 items to other libraries in the Georgia system while 223 items were checked out in person at the Cairo facility.
Mrs. Grigg did express concern about challenges facing the physical plant. She said tree roots are breaching pipes, the roof is leaking in the children’s books area and security cameras need upgrading.
The library is looking to raise money through various sales and events, and Grigg is hoping the public will tell her what it wants. She queried whether a cafe would be welcomed and utilized. “Every library needs to fit the community where it lives,” Mrs. Grigg said.
Meanwhile, memorials and donations are helping the budget, along with fees collected for faxing and copying services.
Mainly, Mrs. Grigg pleaded for “people power,” saying she would welcome volunteers with ideas and brawn.
“How can we help you get more of our tax dollars?” asked one attendee. Grady County Commissioner T.D. David, who attended the session, said the library directors’ efforts to make cuts are being noticed and appreciated, and he hopes government support will improve in the future. “I’m disappointed in the county’s (commission’s) position, but I feel that is changing somewhat. This library is being viewed as a major part of this community,” Commissioner David said.
Tom Lehman, a member of the Library Board of Trustees said, “I’m comfortable that we’ve maxed out what we have to use and what we have to cut.”
Meanwhile, the library wants the community to use the facility, whether for meetings, borrowing books or using the computer.
Anyone with suggestions regarding the library’s operations may contact Mrs. Grigg via email at pam@rmlibrary.org or by telephone at 229-377-3632, extension 4.
Other library personnel at the meeting Tuesday included Teresa Groves, children’s services coordinator, Cathy Rieger, circulation supervisor, and Kim Spencer, HR/finance manager. Lois Duncan of the Library Board of Trustees was also in attendance.
A second session was held Tuesday night.
Posted in News