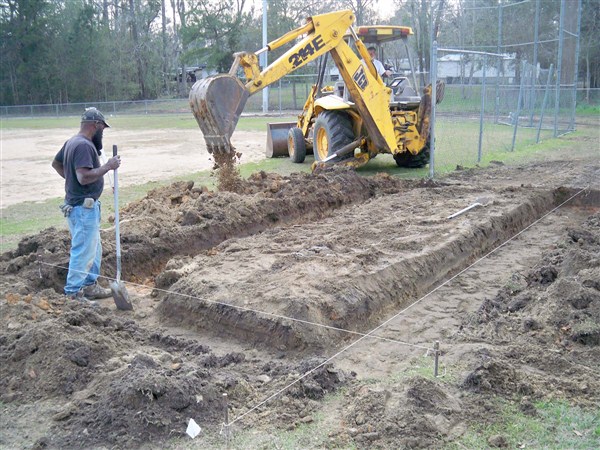 FOUNDATIONS for new dugouts at Holder Park were recently dug by construction crews. The Holder Park baseball field is being revitalized in anticipation of the March 15-16 dedication of the Jackie Robinson Boys & Girls Club of Cairo-Grady County.

With the dedication of the Jackie Robinson Boys & Girls Club of Cairo-Grady County fast approaching, work at Holder Park is continuing in anticipation of the March festivities.
Cairo city officials are also discussing how to best utilize the newly revitalized baseball field at Holder Park, home to the Boys & Girls Club, while at the same time protect the investment of large charitable contributions and city tax dollars.
On Monday night, the city council considered a request from Jerome Bryant of the Cairo Reds ball club to use the Holder Park baseball field for games and practices through Oct. 30.
Councilman James H. (Jimmy) Douglas asked if the council planned to adopt new restrictions on use of park facilities.
Large donations for park improvements have been made by The Scotts Company, the official Lawn Care Company of Major League Baseball, and Musco Lighting.
City Manager Chris Addleton said it is likely an irrigation system will be installed later this year and new sod planted, which are all investments that would need to be protected.
Mayor Richard VanLandingham said the park improvements will make it an ideal location for use by other organizations and schools.
“I want to talk with the county recreation department to see how it could be used as part of its program and also Washington Middle School,” VanLandingham said.
He also said the new lighting system, valued at over $100,000, made the park “nice to use at night, too.”
On the subject of lighting, Councilman Douglas questioned if groups using the park would be required to pay for the cost of utilities to light the field.
According to Addleton, the current rule is for no lights after 10 p.m. and the lights can be activated remotely.
Mayor VanLandingham asked if residents were continuing to play soccer on the field at Holder Park. According to Mayor Pro Tem Ernest Cloud, pick up games are often played on the weekend. He suggested the city require permits to manage how often the field is being used.
“We need to make sure the park is managed properly. We may need to erect signs, in both English and Spanish, saying no use without permission,” the mayor said.
Addleton was asked to bring back a recommendation on park policy for council approval at a future meeting.
The renaming of the Boys & Girls Club in honor of legendary Hall of Famer Jackie Robinson kicks off Friday, March 15, with a fundraising tribute dinner at the Grady Cultural Center.
Then on Saturday, March 16, there will be activities for families and children at the revitalized Holder Park baseball field.
The late Jackie Robinson’s daughter, Sharon, who is Major League Baseball’s educational programming consultant, will attend the festivities.
The Boys & Girls Club has received generous support from its board of directors, the city of Cairo, major league baseball, Musco Lighting and The Scotts Company, which is being applied toward ball field lighting, construction of ball field dugouts, bleachers, player benches, fencing, seeding, fertilizer and field maintenance equipment for the new field.
Posted in News