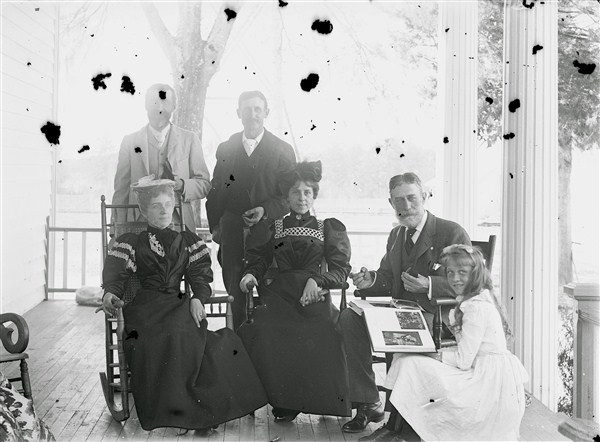 THIS HISTORIC PHOTOGRAPH, courtesy of Claudia Mason and Randy Rhea, shows A. Heywood Mason sitting on his new porch at Susina with his daughter Eleanor and guests. In 1891, Mason acquired the plantation from Dr. John T. Metcalfe. Rhea does not believe this image has ever been published.

The owner of an historic Grady County plantation will be the featured speaker at Sunday’s annual meeting of the Thomas County Historical Society.
Randy Rhea, owner of Susina Plantation in southern Grady County, will present his program “Susina: Did You Know That . . .?” at the 2013 annual meeting of the Thomas County Historical Society beginning at 3 p.m. at the Thomas County Museum of History on Dawson Street in Thomasville.
Rhea will share information from the personal papers of Thomas Edward Blackshear that are stored at the University of Texas at Austin and includes ledger of accounts and the will of James Joseph Blackshear from 1844 to 1858.
Originally known as Cedar Grove Plantation, it was renamed Susina, which is Italian for plum, by Dr. John T. Metcalfe.
According to Rhea, James Joseph Blackshear was killed at Cedar Grove in 1843 and his brother, Thomas Edward Blackshear, was the executor of his estate. During this period Thomas Edward Blackshear moved to Navasota, Texas, saying that Thomas County was “too thickly populated.”
The will and ledger include some fascinating new facts about Cedar Grove that will be revealed at Sunday’s meeting.
Rhea will also share scanned images from several 5×7 glass negative images from the Mason family collection that date to the late 19th century. The Masons were long time owners of Susina.
The current Susina owner says he will reveal another surprise from the late 19th century during the meeting.
The annual meeting of the Thomas County Historical Society is open to the public and Rhea encourages Grady countians interested in the history of Susina to attend.
Posted in News