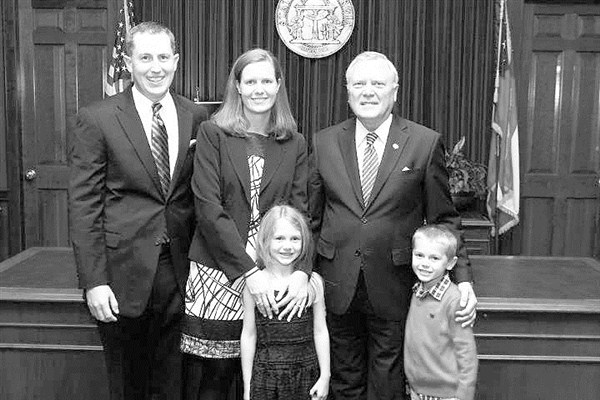 TERESA AND ANDREW MACCARTNEY live in Marietta with their children, Brooke and William. The family is pictured here with Gov. Nathan Deal.

Gov. Nathan Deal has appointed Cairo native Teresa MacCartney as chief financial officer and director of the Office of Planning and Budget.
MacCartney fills a vacancy left by Debbie Dlugolenski Alford, who was named president and chief executive officer of the Georgia Lottery Corporation.
MacCartney began her career in the Governor’s Office of Planning and Budget in 2001.
She left in 2003 to become the senior policy adviser for budget and government affairs at the Georgia Student Finance Commission. She returned to the Office of Planning and Budget in 2005 as director of the education division and was promoted to deputy director in 2010.
While at OPB, she was the state leader for the Federal Stabilization and Education Jobs programs and provided oversight for the divisions of technology and administration.
She served as the deputy superintendent for Race to the Top implementation, providing oversight and management of Georgia’s Race to the Top application.
MacCartney earned a bachelor’s degree in science and a master’s degree in public administration at Georgia Southern University. She and her husband, Andrew, have two children. They reside in Marietta.
MacCartney is the daughter of Juanita and Larry Maxwell of Cairo, and is a 1995 graduate of Cairo High School.
Posted in News