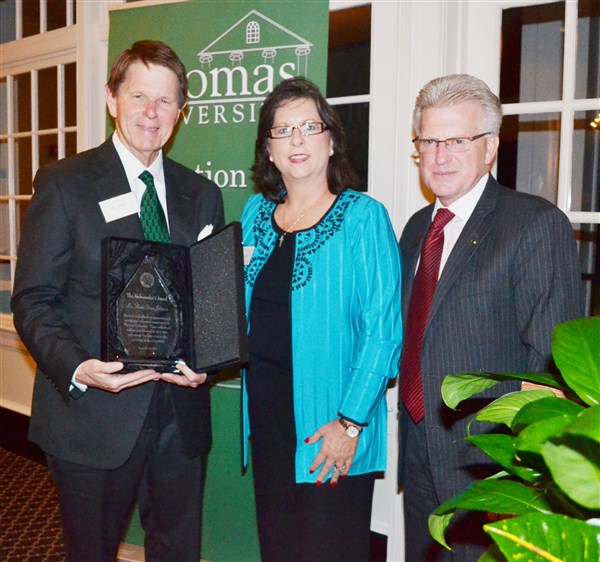 Thomas University honored its outstanding supporters and presented four prestigious awards during its annual Forbes Society Dinner held Saturday, Nov. 10, 2012, at Glen Arven Country Club.
The Ambassador’s Award was presented to Linda Drew Johnson of Cairo. This award is given in appreciation of exceptional volunteer commitment to Thomas University. This award recognizes the recipient’s selfless contribution of time and energy to the activities of the university.
Mrs. Johnson is an alumna of the college and is associated with United National Bank of Cairo. She is married to Bobby Johnson and is the daughter of Jack Drew and the late Joan M. Drew.
Receiving the President’s Award was the Claire H.B. Jonklaas Foundation. The President’s Award is presented to a corporation or foundation recognized for outstanding support of the Thomas University mission and for consistently fostering the continued growth of all aspects of the University.
George Deese received the W. Cameron Forbes Award, which is given to an individual who has displayed a lifelong commitment to education and to Thomas University. The award recognizes an individual who has made a significant impact on the life of the university and the lives of all members of the university community.
Posted in News