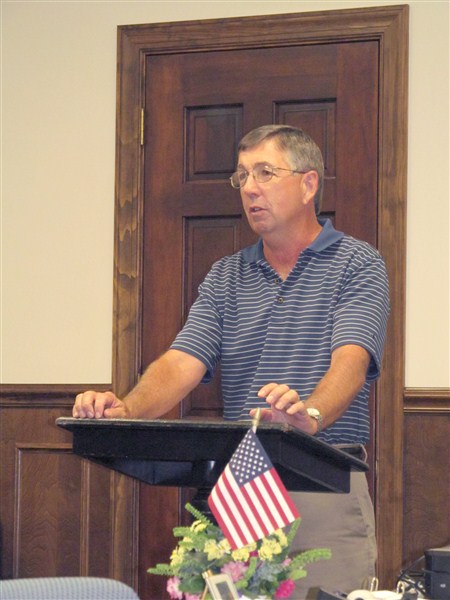 CAIRO MAYOR Richard VanLandingham is pushing for the city to do more to recruit retail businesses to the city.

Cairo Mayor Richard VanLandingham is serious about the city taking a more aggressive approach to recruiting more retail businesses to Cairo and the Archway Partnership with the University of Georgia is providing city leaders a roadmap for the future.
The mayor is also concerned about making all of Cairo more attractive to prospective new residents as well as businesses.
Mayor VanLandingham briefed councilmen on a meeting he and Cairo City Manager Chris Addleton had Monday with Grady County Joint Development Authority Executive Director Chadd Mathis concerning recruitment of new retail businesses.
The mayor said with the proposed streetscape project planned for South Broad Street, he wants to look at other areas in the downtown business district as locations for future development.
“We have several buildings beyond Broad Street, both east and west, that are not being used. If we are going to have a strong downtown, we have got to increase business potential,” the mayor said.
He asked that the council consider what the city should do to improve the appearance of areas of downtown. “Some places look very trashy. As a city council, we must make a decision not to allow some of what is going on,” Mayor VanLandingham said.
Mayor Pro Tem James H. (Jimmy) Douglas cautioned the mayor and council to consider what requirements the city would be placing on existing businesses. “Small businesses are having a tough enough time already and are struggling as it is,” Douglas said. Other than keeping grass cut and junk vehicles and other debris away from businesses, Douglas said the city should not put requirements on local business that the city is not willing to pay for, and he noted the city could not and should not invest tax funds on private property.
In addition to making the community more attractive to new business and identifying under utilized potential retail space, city leaders are keen on recruiting new retailers to Cairo.
As a tool in the recruitment of new retail businesses, the University of Georgia Small Business Development Center recently conducted an Over/Under Supply Analysis.
The research was done in cooperation with the Archway Partnership and focused on consumer-oriented business sectors within the Grady County economy.
The “broad business categories” analyzed in the study included Retail Trade and Accommodation and Food Services.
Grady County was compared with 19 other similar counties, including nine in Georgia, four in South Carolina, three in North Carolina, two in Alabama and one in Florida.
According to the study, the primary purpose is to compare the number of businesses operating in specific business sectors within Grady County to those in operation within the set of demographically comparable counties in the Southeast to highlight any business gaps that may exist.
The study indicates where Grady County is both over supplied and under supplied. However, Gwen Hanks, director of applied research with the Small Business Development Center, and Houston Harker, research professional, applied research with the SBDC, note that additional research may be needed to address the feasibility of additional businesses within the local market.
The researchers also note, “the analysis points to several sectors as potentially undersupplied, these sectors may not fit the expressed or desired economic development vision of the community stakeholders.”
The four “significantly” undersupplied sectors of the Grady County economy identified in the research are: Building Material and Supplies Dealers; Grocery Stores; Health and Personal Care Stores; and Full Service Restaurants.
The study identified 15 other undersupplied sectors that the data indicates are “marginally undersupplied,” which indicates the local market may not meet the demand for these goods and services.
The University of Georgia study indicates that Cairo and Grady County are oversupplied by Lawn and Garden Equipment and Supplies Stores; Specialty Food Stores; Beer, Wine and Liquor Stores, and Direct Selling Establishments.
Specialty Food Stores are businesses such as meat markets, seafood markets, fruit & vegetable markets, bakery stores, etc. Direct Selling Establishments are establishments primarily engaged in nonstore retailing such as home delivery of LP gas and other fuels, frozen food providers, coffee-break service providers, etc.
UGA researchers note that there are no shoe stores, book-periodical-music stores, used merchandise stores, RV parks, or lounges in the county. The report states, “These categories might be explored for potential opportunities, although care should be taken in the interpretation of the data. Businesses in these categories may not fit the community’s specific economic development plan.”
Other counties used in the study including Grady County are: Abbeville County, S.C.; Anson County, N.C., Barnwell County, S.C., Burke County, Ga., Chatooga County, Ga., Emanuel County, Ga., Fairfield County, S.C., Hertford County, N.C., Martin County, N.C., Meriwether County, Ga., Mitchell County, Ga., Monroe County, Ala., Randolph County, Ala., Stephens County, Ga., Tattnall County, Ga., Taylor County, Fla., Toombs County, Ga., Union County, S.C., and Upson County, Ga.
JDA Executive Director Mathis says that research like that found in the Over/Under Supply study can be helpful in determining what type of business to recruit to Cairo and Grady County.
“I have also met with officials with the Georgia Department of Community Affairs and the Southwest Georgia Regional Commission to investigate the possibility of establishing an opportunity zone(s) in the downtown area,” Mathis said.
Mathis said the largely vacant Downtown Shopping Plaza on M.L. King Jr. Avenue S.W., as well as the former Harvey’s Supermarket location on Second Avenue S.E., are prime areas for retail development.
The JDA chief says that creation of an opportunity zone provides the opportunity for businesses to take advantage of state tax credits which makes locating in the zoned area attractive to new businesses.
Monday night, the mayor pointed out downtown development is a long-term project, but he encouraged the city council to be prepared to discuss the matter in future meetings.
“If we can get more people to purchase goods and services here rather than elsewhere, it is a very positive thing. If we don’t do anything different, we will not get improvement in our retail business community,” the mayor said.
Posted in News