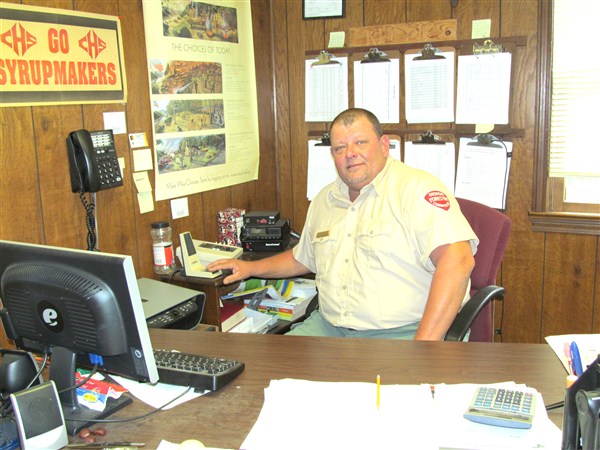 CHIEF RANGER RANDY KIRKSEY shows off a radio that he says was once used quite frequently, but has seen less and less employment over the course of his 32 years and 6 months with the Georgia Forestry Commission.

Chief Ranger Randy Kirksey retired from the Georgia Forestry Commission Friday after more than 32 years of service. Kirksey, now 52, says he has no intention of getting too far away from the career that he considered “a dream job.” “My house is only a mile and a half away [from the department . . . I’ll be stopping by all the time.”
Kirksey, chief ranger since 1992, started with the Forestry Commission when he was 20 as a temporary fire tower operator in Seminole County in the winter of 1980. He says that procedures at the forestry unit have changed quite a bit since that first winter. Fire towers themselves, lookout towers used to spot smoke from wildfires, have become obsolete in the face of modern technology.
“We used to rely on them quite a bit,” says Kirksey, “nobody had cell phones and we didn’t have air patrol. At that time there’d be one phone within three or four miles.”
Kirksey transferred to the Grady County unit of the Georgia Forestry Commission in June of 1981, three decades before it consolidated with the unit in Thomas County to become the Grady-Thomas unit. His transfer allowed his wife, Debra, to be closer to her Grady County roots. He says that, initially, he had every intention of returning to Seminole County after a year or two to take over the chief ranger position there and to be closer to his parents, Bonnie and Charlie Kirksey, who still live in Seminole County.
Kirksey’s plans changed, though, once he moved to Cairo. “I always liked Cairo,” he explains, “super place, super clean, super nice folks. I got over here and liked it so well I decided to stay.”
Over the next three decades, Kirksey helped the forestry unit adhere to a strict wildfire prevention program. Even in his final days at with the Forestry Commission he seemed much more inclined to emphasize the importance of controlled burning and wildfire prevention measures than to talk about his impending retirement.
Kirksey spent 14 years plowing fire breaks for the Forestry Unit in Grady County. “We plow on average about 750 miles of firebreaks,” says Kirksey, who estimates Grady County to be in the top three in the 16-county district for firebreaks. The breaks function to keep controlled fires within property boundaries, and to keep wildfires out; “fire doesn’t know property lines,” jokes Kirksey.
The controlled burning contained within the firebreaks allows landowners to safely use fire to rid their property of underbrush that could fuel damaging wildfires, and to help pines – a fire-dependent species – grow. Controlled burning helps to prevent wildfire, explains Kirksey, “and if there is a wildfire, it’s not near as intense.”
Kirksey claims he fondly remembers his time on the tractors plowing fire breaks. He says he would spend entire days alone in the woods, “nobody out there but me and the deer and the turkeys.” According to Kirksey, this was a great career path for him; “I was from a small community – always hunted and fished – started at a very young age appreciating nature and the woods […] I always wanted to be outside and work outside.”
Looking back over a career that included tree plantings, fire fighting, controlled burning, and working with community members to understand and manage their land and the woods, Kirksey declares, “The biggest accomplishment in my time is with the rural volunteer fire departments. When I started there were two fire trucks, one in Cairo and one in Calvary, and a handful of volunteers.”
From these humble beginnings, the fire departments grew exponentially over the course of Kirksey’s career. The local unit worked with the Georgia Forestry Commission to get more rural fire departments started. They also spent summers building fire knockers – self-pumped, 1,000-gallon fire trucks – which the counties would request and be given on a 99-year lease at the cost of what it took to make the truck. Kirksey says he remembers a lot of successful yard sales and chicken-and-rice dinners helping to raise funds for new trucks and new fire departments.
Recently, Grady County has purchased two “super knockers,” which are bigger, more powerful rigs than the fire knockers. Overall, Kirksey says, “it’s come a long way from two trucks in barns.” According to Kirksey, the county now has between 30 and 40 fire trucks.
Beyond simply putting out fires, the trucks have helped to lower ISO ratings on properties outside the city limits, which Kirksey claims has lowered insurance costs for property owners.
Now that Kirksey’s term at the Forestry Commission is completed, he says it’s time to “get out and enjoy.” He does, however, plan on finding a part-time job that will keep him occupied, and likely out in the woods. The Forestry Commission has yet to fill the chief ranger position and will interview candidates in September.
Kirksey and his wife Debra have two sons, Chuck, who lives in Atlanta and is married to Julie Kirksey, and Blair, who lives in Cairo and is married to Sydney Kirksey.
Posted in News