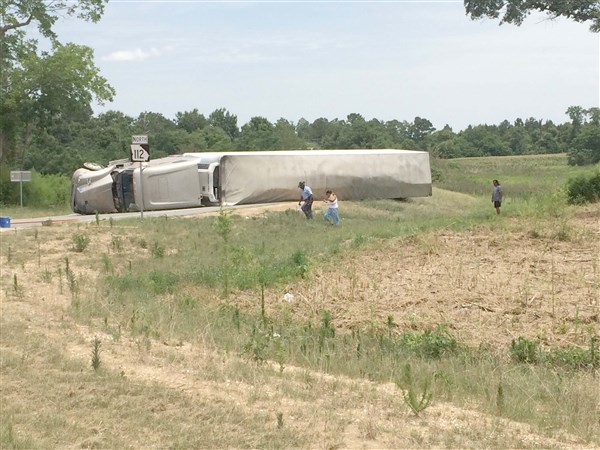 THE CAMILLA HIGHWAY was closed from noon until about 4:40 p.m. while crews cleaned up this accident scene.

The Camilla Highway was closed for most of the afternoon on Saturday after a semitrailer truck hauling corn overturned on a curve in the road.
The 47-year-old driver of the truck is charged with Too Fast for Conditions, a misdemeanor.
He was trying to negotiate a curve on Highway 112 that was recently constructed by the Georgia DOT near its intersection with U.S. 84 in Cairo when the accident happened around noon.
The 2007 Freightliner Columbia was traveling South on 112 when the truck rolled to its side, and ultimately spilled its load of corn on the roadway. The truck was owned by L.L. Fast Transport, Inc., of Miami, according to the Georgia State Patrol.
Neither the male driver nor a female passenger, both of Hialeah, Fla., was injured in the accident, the GSP reports.
Traffic was rerouted to Upper Hawthorne Trail until the scene was cleared around 4:40 p.m.
Several first responders from Grady County assisted at the scene, including the Cairo Fire Department, Cairo Police Department, Grady County Sheriff’s Office, Grady County volunteer firefighters and Grady County Emergency Medical Service.
Posted in News