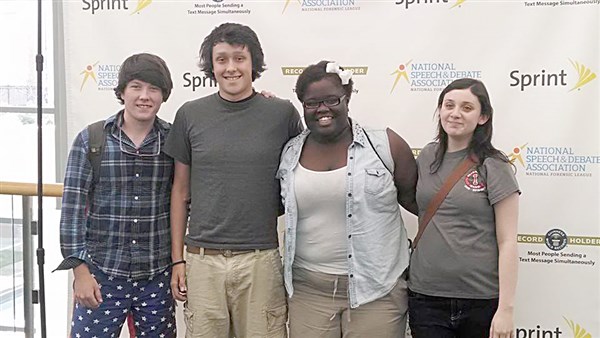 Four Cairo High School students and their sponsor attended the 2014 National Speech and Debate Association Tournament in Overland Park, Kansas, just outside Kansas City June 16-20. Students from Cairo High School attending were Tyler Angelier, Bailey Duggan, Ka’Nisha Hicks and Casey Lewis, along with their debate coach, CHS English teacher Hank Smith.
Bailey and Tyler qualified as one of only two other debate teams to represent Georgia at nationals (The other team was from Marist H.S. in Atlanta).  The team focused on Policy Debate. The topic the debate team had been working on all year was: “Resolved: The United States Federal Government should substantially increase its economic engagement toward Cuba, Mexico, and/or Venezuela.” Tyler and Bailey focused on improving the transportation infrastructure on the U.S./Mexican border.
Ka’Nisha Hicks and Casey Lewis competed in Original Oratory. Kanisha’s topic dealt with the topic of bullying in school, and Casey’s dealt with the importance of friendship.
As an interesting supplement, the tournament participants attempted and won a Guinness World Record for “Most people sending a text message simultaneously.”
Three thousand students participated in the tournament, billed as the world’s largest academic competition. The event drew visitors from across the country and beyond. Top performers took home more than $200,000 in college scholarships.
Posted in News