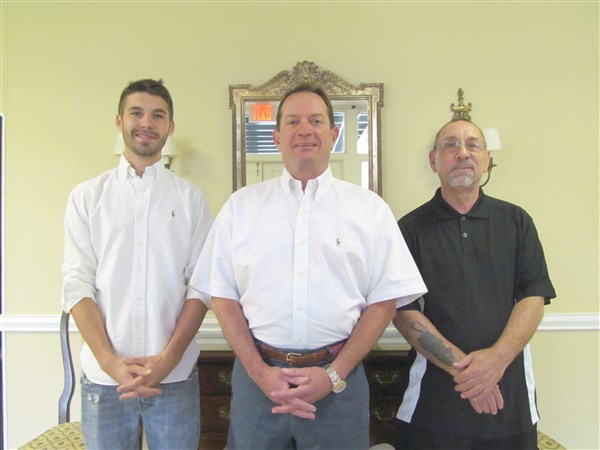 JODY FITZPATRICK, center, has teamed up with Ross Ivey, left, and Chef René Robitaille to manage and operate the food and beverage service at the Cairo Country Club.

A self-professed “foodie” has teamed up with a chef and talented cook to create a new dining experience at the Cairo Country Club.
Jody Fitzpatrick is a relative newcomer to southwest Georgia, but he said he has fallen in love with this area.
Fitzpatrick is a native of New Jersey, but three years ago he purchased a Frank McCall designed residence in Moultrie and made this area his home.
“I’m a big time foodie,” Fitzpatrick said last week.
Although this is a new venture for him, Fitzpatrick said he has partnered with two men who are very talented in the kitchen.
Chef René Robitaille will be managing the kitchen, coming to CCC from Moultrie’s Sunset Country Club, where he has worked for the last decade.
Many Grady Countians will remember Robitaille from his days in the kitchen at the former Neel House Restaurant in Thomasville.
Robitaille said he grew up in the kitchens of his grandparents business establishments, but he really learned a lot about cooking during his four years in the U.S. Navy.
The chef is a native of Rhode Island, but he has been a southwest Georgia resident since 1996.
His past experience also includes stints at Wannamoisett Country Club in Rumford, Rhode Island and Twin Rivers Casino in Lincoln, Rhode Island.
“A lot of the chefs in Rhode Island were Italian so a lot of my experience has been with Italian cuisine,” Robitaille said.
Fitzpatrick is quick to note that in Moultrie and the surrounding area Robitaille is known for his fried chicken.
“A lot of folks think René’s fried chicken is the best they have ever tasted,” Fitzpatrick said.
Robitaille is a resident of Thomas County.
Rounding out the cooking team at CCC is Ross Ivey, who is also a Moultrie resident, and according to Fitzpatrick, a talented cook.
Ivey has worked in the food service at Colquitt Regional Hospital and for the past three years has been the breakfast and lunch manager for Three Crazy Bakers eatery in Moultrie.
Ivey will be creating specialty sandwiches and salads as well as preparing breakfast Monday through Saturday.
Fitzpatrick and his team are expanding the food and beverage service at the club and in addition to adding breakfast to the meal offerings, the club will now be open for lunch Monday through Saturday in addition to the traditional Sunday lunch buffet.
“We want people to know that everyone is welcome to come and dine with us. The restaurant is not open just for the club membership so everyone is welcome. We invite you to come be our guest and enjoy a quality meal for a reasonable price,” Fitzpatrick said.
Fitzpatrick’s plan is to offer a deli style menu on Tuesday, Thursday and Saturday and offer a lunch buffet on Monday, Wednesday and Friday.
The club will soon begin serving breakfast beginning at 7 a.m. on Monday through Saturday; lunch will be served Monday through Saturday beginning at 11 a.m; and dinner will be served on Thursday, Friday and Saturday nights.
“We want to bring a farm-to-table concept to Cairo Country Club and offer local residents a unique dining experience,” Fitzpatrick said.
The new food and beverage director said that he and his team will be ramping up over the course of the next two months before launching evening meals.
“We have hit the ground running,” Fitzpatrick said.
The new food and beverage service team took over earlier than originally planned, but Fitzpatrick and his crew are busy preparing for an Easter Sunday buffet that will feature roast beef, baked ham, baked and fried chicken, farm fresh vegetables, a variety of salads as well as cake and ice cream.
Fitzpatrick said reservations are welcomed, but not required. To make reservations or to learn more about the food and beverage services at Cairo Country Club call 229-377-4506.
Posted in News