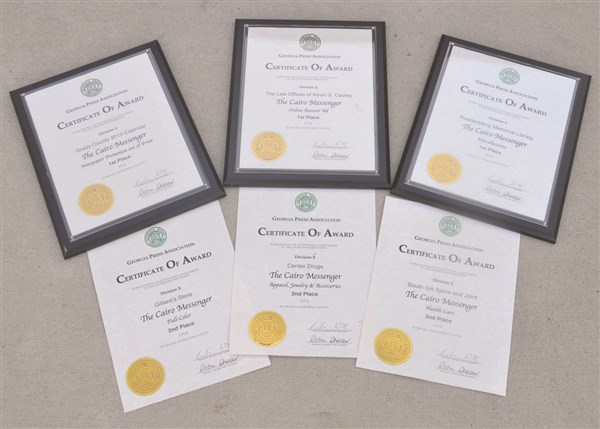 The Cairo Messenger racked up more awards at the Georgia Press Association’s Advertising Conference held last week at Lake Blackshear Resort outside of Cordele.
The newspaper won three first place awards and three second place awards in the GPA Advertising Contest, which this year was judged by members of the Virginia Press Association.
Ads submitted in 20 different categories ranging from motor vehicle ads to food ads to full color ads to health care ads are submitted by participating newspapers for judging in the annual Advertising Contest. The Cairo Messenger competes with all Georgia weekly papers in the state with circulations of 4,000 to 14,999.
“I am very pleased with these awards. We are an award-winning newspaper, because we have an award-winning designer in Brynn Knight. However, it takes a team effort to publish a quality community newspaper. It is very satisfying to know that our hard work does not go unnoticed,” said Messenger Editor and Publisher Randolph H. Wind.
The Messenger won first place in the Newspaper Promotion out-of-print with its 2013 Community Calendar. The newspaper also won a first place honor for the on-line banner ad designed by Graphic Designer Brynn Knight for The Law Office of Kevin S. Cauley. A third first place award won by the paper was for an ad the newspaper designed for Roddenbery Memorial Library.
Ads designed for advertisers Gilliard’s Store, Center Drugs, and South Georgia Spine & Joint Center all won second place honors.
“When we win an award for an ad, it is really our advertisers who are the winners. Effective, eye-catching and attractive ads result in more customers and potential customers reading a local merchant’s ad,” Wind said.
Over the last five years, The Messenger has won 86 awards in GPA contests.
Posted in News