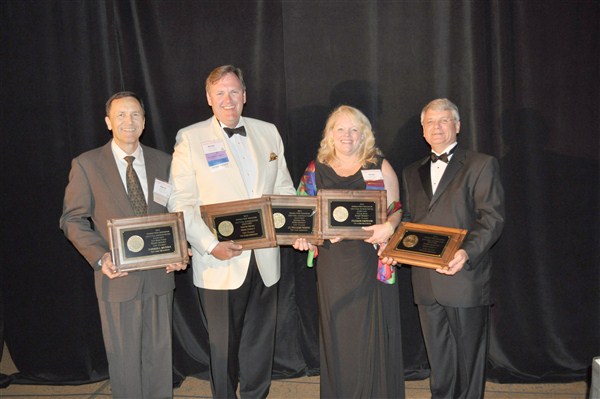 The Cairo Messenger was a big winner in the Georgia Press Association’s 2013 Georgia Better Newspaper Contest. The awards were presented Friday night at the GPA’s 127th annual convention held at Jekyll Island, Ga.
The Messenger won second place in General Excellence, which is the highest prize awarded to a participating newspaper. The winner of General Excellence this year was The Eatonton Messenger. Tied for third place was The White County News and The Summerville News. The Cairo Messenger won first place in General Excellence in the 2012 contest.
The Messenger competes in the large weekly division, which includes all papers in Georgia with circulation of 5,000 to 14,999.
“We were thrilled to be recognized once again as one of the state’s best community newspapers. The awards we won were the effort of both individual staff members and our team as a whole. No matter whose name is on the plaque our subscribers, readers, advertisers and our community are the real winners. We are proud to publish an award-winning community paper dedicated to the growth and development of our county,” Messenger Editor and Publisher Randolph H. Wind said.
Representing The Messenger at the GPA convention were Editor Wind and Mrs. Mesha C. Wind and Messenger correspondent Darrell Mudra, who won first place for a spot news photograph taken at Eastside Elementary School on the opening day of school for the 2012-2013 school term.
In addition, The Messenger won first place awards for Editor Wind’s headline writing; first place for editorial page; and first place in special sections for the paper’s Pigskin Preview.
The newspaper won four second place awards including second place for information graphics by Graphic Designer Brynn Knight; second place for religion coverage by the newspaper staff; second place for education coverage by the newspaper staff; and Messenger President Bert Wind won second place for a sports feature photo.
The Messenger won third place in the Page One category and Messenger photographer Jennifer Searan won third place in feature photos.
“I believe the division we compete in has some of the finest papers not only in Georgia, but anywhere. The competition is unbelievably tough,” Wind said.
The Messenger’s strong showing in the Better Newspaper Contest comes on the heels of the GPA’s Advertising Contest, which was held in April. The Cairo Messenger won 20 awards in the ad contest, more than any other large weekly in the state, which counts for points in the General Excellence competition.
Over the last four years, The Messenger has won a total of 80 awards in the GPA contests.
Wind credits the talent and dedication of team members Bert Wind – sports photography; Mesha Wind – ad sales and news reporting; Brynn Knight – graphic design; Linda Lee – ad sales; Jennifer Searan – photography and ad sales; Darrell Mudra – correspondent; Jim Wyatt – proofreading and writing; Michael Best – sports writing; Jeff Zipperer, Rufus Morgan and Pat Wind – circulation; James Lamb – contributing photographer; and contributors Pearline Thompson, Sheridan Harrell and Joyce Herndon; for the newspaper’s recent success.
The 2013 Better Newspaper Contest was judged by newspaper professionals who are members of the West Virginia Press Association.
The rules of the contest designate the dates of issues that are to be submitted for judging in categories ranging from layout and design to news writing to sports photo. Those dates are not made public until after the end of the year so newspapers cannot plan for the issues that will be judged.
The newspaper editor noted that without the continued support of the paper’s advertisers, subscribers and readers the newspaper could not survive.
“We appreciate the support this community provides us and we hope the feeling is mutual,” Wind said.
Posted in News